Chex Quest HD is a 2020 remake of the original five-level episode of Chex Quest. 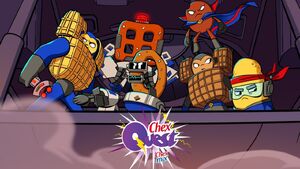 At the IFS Space Station in the Gamma Sector, Dr. Josh Crispinbowl explains to the IFS that a volcanic explosion on planet Bazoik revealed the existence of Flemoids, a race of evil snack-eating aliens from another dimension. Totino's Pete Zaroll, General Mills, and General Floater Breakfaust gasp in astonishment. He says they're immune to conventional weaponry, but by recalibrating their zorchers, they can "zorch" the Flemoids back to their own dimension. Admiral Muriel Wheet reports that the Flemoids have taken over Bazoik and captured their people there, including five members of the Chex Mix Squadron, and they need a volunteer to rescue them. General Rolley Puffer asks "What soldier'd be fool enough to enter a cavern full of unstoppable Flemoids from another dimension?" The last member of the Chex Mix Squadron volunteers, flies their spaceship to the Landing Zone on Bazoik, and heads for the caverns.

The five levels of Chex Quest HD are based on those of the original Chex Quest:

The player character frees his/her comrades from Flembrane's mucus trap at the Caverns of Bazoik and they head towards the ship. Fred cries "Oh no!" as the remaining Flemoids attack them. The reunited Chex Mix Squadron zorches their way back inside and starts to take off in their spaceship, but it's stuck to the ground by mucus, and whether or not they break free is briefly left on a cliffhanger. Admiral Wheet gives a speech of condolence to all of the nutrients and Chex Mix Warriors who were lost to the Flemoid horde. But the Squadron survived, and she awards each of them the Intergalactic Chexdallion of Bravery, saying "You truly are the perfect mix."

Before the final credits, an ending scene plays, which varies depending on which character you played as:

General Puffer eats bowls of Chex Cereal with the Chex Mix Squadron and congratulates them for a job well done. Suddenly, Fred Chexter sneezes out a small Flemoid, then a full-sized CD-ROM. They're surprised, since they thought all CDs were discarded in Y2K. It turns out to be a combat training simulation for fighting waves Flemoids with friends, and they pop it in to play it. The Co-Op level contains new purple varieties of standard Flemoids, giant retro 90s objects in the background like audio tape recorders and VHS tapes, and a museum of Chex Quest artwork old and new, including some of Tom Scioli's illustrations from Untold Tales of Chex Quest #1.

Differences from the original game[]

Community content is available under CC-BY-SA unless otherwise noted.
Advertisement